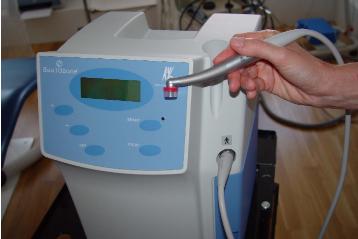 How HealOzone can be used to treat tooth decay

Until recently, the only way to stop decay from spreading through a tooth was to drill out the decayed parts of the tooth. HealOzone is an alternative treatment method, which instead focuses on killing the bacteria in the decayed part of the tooth. This method is preferred by many patients because it is painless and does not involve the unsettling feeling of the teeth being drilled.

How does HealOzone work?

HealOzone is a device that produces ozone from oxygen and applies it to the part of the tooth that is affected by decay. The ozone acts to kill the bacteria that are causing the tooth to decay. Studies have shown that as little as ten seconds of ozone treatment can kill 99 percent of oral bacteria.

Once the bacteria are dead, a substance that encourages remineralisation can be used to supply minerals to the damaged tooth. This process can actually repair some of the damage that the bacteria have caused, which makes it a much more attractive option than simply drilling away the damaged regions.

Sites that have significant decay will still require restoration. A white composite filling can be placed into the site to protect the tooth beneath. The size of the filling will depend on how big the original cavity was.

HealOzone is very popular with patients who suffer from dental phobia, as it is entirely painless and requires no drilling or injections. HealOzone is often recommended for children, partly for this reason. The treatment is safe for both children and adults.

HealOzone is useful for treating decay in areas that would be very difficult to reach through traditional drilling, such as root decay. Treating decay in such cases has until now required extensive drilling and often results in pain for the patient.

Although HealOzone represents an important breakthrough in treating tooth decay, early diagnosis of decay remains of the utmost importance. HealOzone treatments are most effective when applied during the early stages of decay, so seeing the dentist regularly is still the best way to preserve and protect dental health.