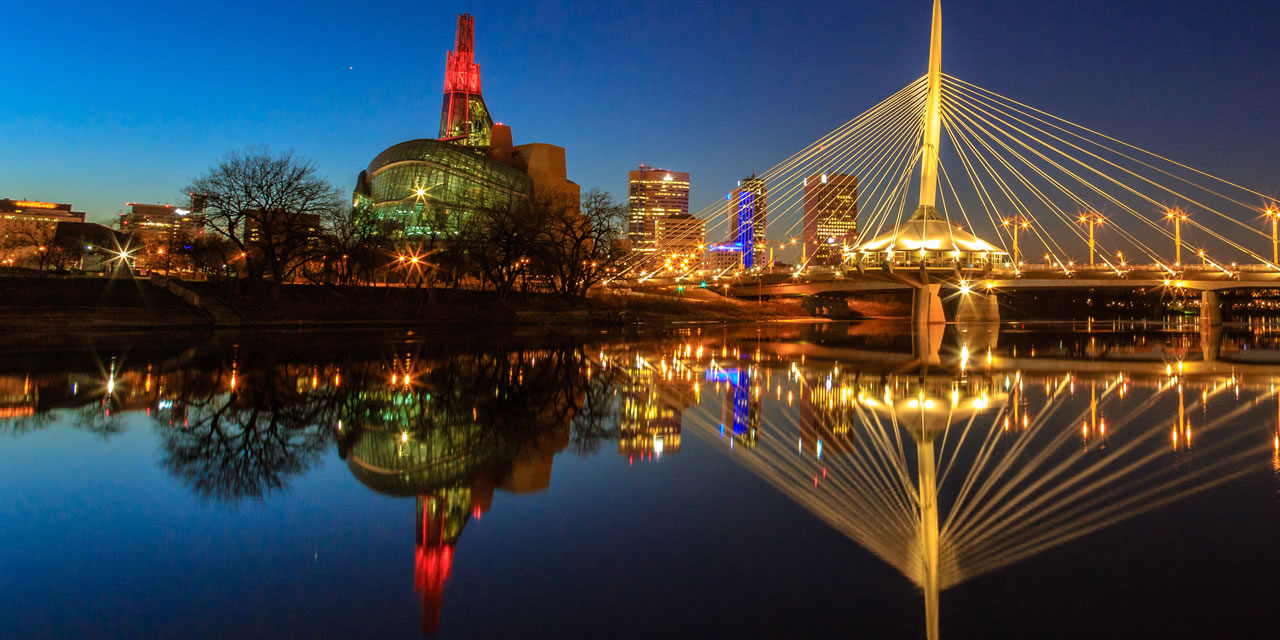 Located at the juncture of the Red and Assiniboine rivers, Manitoba’s capital has a rich history stretching back thousands of years. First Nations individuals including the Cree and Ojibwa tribes once canoed down the rivers, meeting where Winnipeg now stands to trade corn and other crops.

The Ojibwa shared their knowledge with French fur traders, who established the Fort Rouge trading post near Winnipeg in 1738. The fur trade flourished for more than 70 years until Winnipeg was permanently settled in 1809. Winnipeg was originally called Fort Gibraltar, then Fort Garry, before it became known as Winnipeg in 1873. Its name comes from the Cree word for “muddy waters,” a reference to the notoriously murky local rivers.

Winnipeg experienced unrest during the Red River Rebellion but soon became Manitoba’s most prosperous city. Winnipeg was named the province’s capital in 1873, an honour it’s held continuously ever since.

Winnipeg’s jam-packed social calendar ensures that you’ll always find something to see and do within the city limits. Warm summer weather encourages locals and visitors to get outdoors. Explore the artworks at Leo Mol Sculpture Garden or catch a performance from the Winnipeg Pops Orchestra or Canada’s Royal Winnipeg Ballet in Assiniboine Park. Summer also brings the Winnipeg International Children’s Festival, TD Winnipeg International Jazz Festival, and the Winnipeg Fringe Theatre Festival, one of the largest fringe festivals in North America.

Winnipeg’s culinary scene is legendary, with an intriguing mix of timeless family-owned restaurants and creative establishments catering for modern palates. Local restaurateurs, brewers, and other food and beverage businesses come together for annual gourmet events including the Manitoba Food Festival in June and the Winnipeg BBQ & Blues Festival each August. Winnipeg also loves sports. You’ll find locals cheering on the Winnipeg Goldeyes during the summer and getting behind the Winnipeg Jets and the Winnipeg Blue Bombers when the temperatures cool.

The Future of Winnipeg

Winnipeg is a dynamic city with a diverse economy and growing immigrant and First Nations population. New modern neighbourhoods with condominium and apartment buildings are developing to complement the single-family homes in its historic communities. As the city grows, the Winnipeg Transit Master Plan will ensure local communities stay connected. The creation of the Permit Logistics Desk at the Winnipeg Chamber allows new businesses to more easily call Winnipeg home.

New community projects will meet the demands of Winnipeg’s growing population and foster a family-friendly atmosphere throughout the city. Aging infrastructure is being revitalized to complement new additions to Winnipeg, including rapid transit corridors, the East of the Red Recreation Complex, and the South Winnipeg Recreation Campus. As Winnipeg’s downtown district and suburbs continue improving, the city will receive more parking and public transportation options and more entertainment facilities for enjoying all the city offers.

With a fascinating history and exciting future, Winnipeg is a city that the 123Dentist Network is proud to be part of.