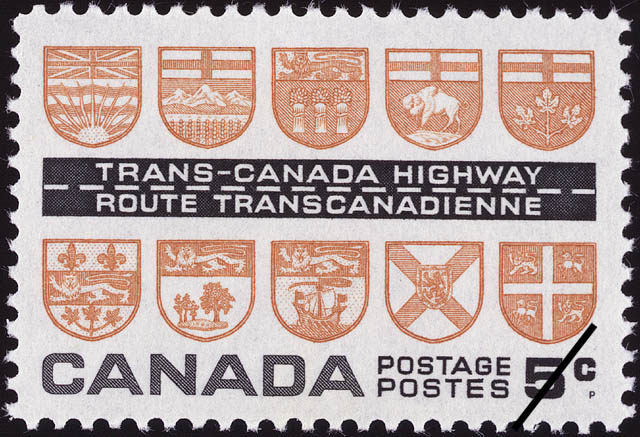 When the Canadian government convinced British Columbia to join the Confederation of the Dominion of Canada in 1871, the nation stretched from the Atlantic Ocean to the Pacific Ocean. It soon became clear that Canada would need a robust transportation system to serve the nation. While the transcontinental railroad was the first part of this transportation network, the Trans-Canada Highway further promoted transcontinental transportation.

Learn more about when the Trans-Canada Highway was built, how long construction took, and the impact the highway had on communities across the country.

The Beginning of the Highway 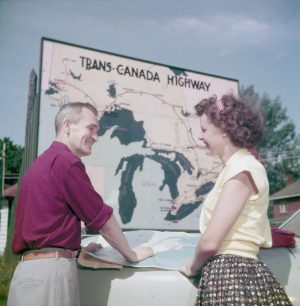 Canadian citizens had been interested in a transcontinental highway as early as 1910. However, it wasn’t until almost 40 years later that the system was approved by the Trans-Canada Highway Act of 1949. The act authorized the federal and provincial governments to build the highway by sharing the costs. Construction of the highway required plenty of negotiation between the provinces and the national Canadian government. Arguments over construction standards, funding, and the route the highway should take were common. However, the disputes were eventually worked out, and construction started in 1950.

Construction of the Highway

If you drive from one coast of Canada to the other on the Trans-Canada Highway, you’ll notice the road doesn’t have a uniform designation across the country. Each province was responsible for the construction of its own section of highway, and the Canadian government was solely responsible for the sections of highway that passed through the national parks. Some provinces chose to have the highway follow existing roadways, while other provinces had to construct completely new sections of the highway.

The Completion of the Trans-Canada Highway

Although the target completion date for the highway was December 1956, construction took much longer to complete because of the difficult terrain. For example, the section of highway that travels between Golden and Revelstoke, British Columbia, receives an average of 15.2 metres of snowfall a year and has high avalanche risks. Construction crews could only work during the warmer months on this part of the highway, and the province had to install earth mounds, snow sheds, and other avalanche control devices to make this section safe to drive.

The highway’s official dedication ceremony occurred on September 3, 1962, at Rogers Pass in Glacier National Park. However, construction actually continued on the highway until 1971. At that point, the Trans-Canada Highway stretched for 7,821 kilometres, making it the longest national road in the country and one of the longest in the world. Since 1971, some provinces have created other sections of road as part of the Trans-Canada Highway. 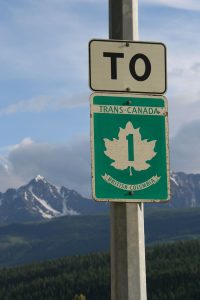 Today, the Trans-Canada Highway runs from St. John’s, Newfoundland, to Victoria, British Columbia. However, the highway isn’t simply one route. Instead, it consists of many routes that wind through Canada. Two sections of the highway run from Nova Scotia to New Brunswick, and one section travels to Prince Edward Island over the Confederation Bridge. You’ll also find several routes that extend through Ontario and two sections of the highway that start west of Montreal.

As you travel west, the main part of the Trans-Canada Highway passes through large cities that include Winnipeg, Calgary, and Banff. It continues through the Canadian Rockies before eventually reaching Vancouver Island, British Columbia.

In 1970, a northern section of the Trans-Canada Highway called Highway 16, sometimes also referred to as Yellowhead Highway, opened in Western Canada. Highway 16 splits away from the Trans-Canada Highway west of Winnipeg. It travels through Saskatoon, Edmonton, and Jasper. The highway follows the Yellowhead Pass to pass through the Rocky Mountains before finally reaching the Pacific Ocean at Prince Rupert, British Columbia.

Economic Impact of the Highway

From the first day of construction to today, the economic impact of the Trans-Canada Highway has been significant. The construction of the highway created thousands of jobs. Additionally, it provided road access to various communities throughout the country, which helped improve their economy. The Trans-Canada Highway also made transporting goods across the country and to shipping ports on both coasts significantly easier. 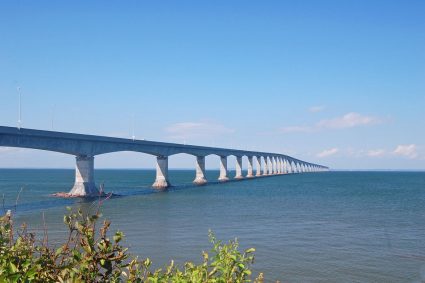 The ferries and bridges of the Trans-Canada Highway are a few of its distinctive features. The highway has three official ferries as part of its route. One ferry runs between Caribou, Nova Scotia, and Woods Island, Prince Edward Island. Another ferry travels between Channel-Port aux Basques, Newfoundland, and North Sydney, Nova Scotia. The final ferry travels between Horseshoe Bay and Nanaimo in British Columbia. Additionally, along with the Confederation Bridge to Prince Edward Island, the other large bridge that’s part of the highway system is the Canso Causeway, which connects Cape Breton Island, Nova Scotia, to mainland Canada.

While the construction of the Trans-Canada Highway had a major impact on the growth and development of Canada, it also became a symbol of adventure for Canadians and encouraged them to explore the beauty of their own nation.

For a final trip down memory highway, watch this quaint and beautiful 1958 film from the National Film Board of Canada, entitled “Trans Canada Summer” that follows the Trans-Canada Highway from east to west.