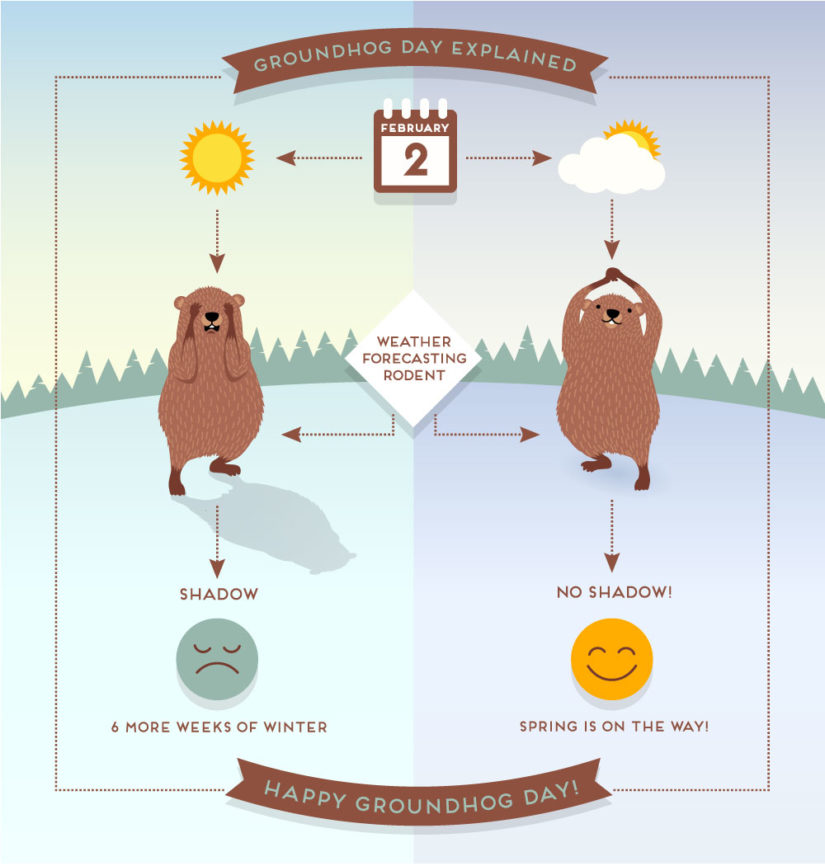 By the time you’re reading this, you may already know that Punxsutawney Phil saw his shadow today, thereby warning residents of Pennsylvania to expect 6 more weeks of winter. Here in Canada, Nova Scotia’s Shubenacadie Sam did not see his shadow, nor did Alberta’s Balzac Billy, giving us some hope that winter’s end is around the corner. But Ontario’s Wiarton Willie swung the prognosticating rodent pendulum back to the middle by concurring with Punxsutawney Phil and predicting 6 more weeks.

It’s fun to entertain these superstitious notions, but you may be wondering, where do they originate? Read on to learn about the history of Groundhog Day in North America.

Since at least 1886, people in the United States and some parts of Canada have anxiously awaited the emergence of a rodent to determine whether they will have to endure six more weeks of winter or whether spring is officially upon them. While the act has become a little bit of superstition mixed with a lot of fun and fanfare, the tradition of Groundhog Day has its roots going back well before Canadians and Americans began to observe it.

An old Christian celebration that marked the midway point between the winter solstice and the summer equinox, Candlemas was a European tradition dating back to long before the 1886 official observance date. During this celebration, local clergy members would bless candles that were much needed by their parishioners to get them through the dark winter months. Then, they distributed the candles to get them through the rest of the season.

Superstition began to follow this tradition, and it was believed that if the distribution and the celebration would occur on a clear and sunny day, the rest of the winter could be expected to be unpleasant, rough, and longer in duration. However, if the weather was warmer and the skies cloudy, it was believed that spring was just around the corner. Around the time of the event, young children would sing English rhymes regarding the celebration:

“If Candlemas be fair and bright,
Come, Winter, have another flight;
If Candlemas brings clouds and rain,
Go Winter, and come not again.”

The German tradition added its own little twist to the superstition revolving around the celebration, which was believed to have been passed down to the German people by Roman conquerors. They would present a hedgehog to help determine the weather conditions. If the day was clear and sunny, the hedgehog would emerge to find his shadow and the prediction of a long or secondary winter would be proclaimed. However, if the hedgehog emerged for the celebration on a cloudy day, he would not see his shadow, and the prediction would be that spring would come soon.

As settlers began to travel to seek a new life in the New World, the area of Pennsylvania saw a large influx of German settlers during the late 19th century. The new residents brought with them the old traditions, though with a lack of hedgehogs in the area. The new tradition was switched to a groundhog, an animal they were more likely to find in their new home.

The original event and celebration started as a local gathering at area farms, but it has grown today to an event where thousands wait for the emergence of Punxsutawney Phil’s offspring to come out and make the famed weather prediction each year. With celebrations growing each year, the annual tradition has now turned into a celebrity-studded event that makes Groundhog Day a much-anticipated event in Punxsutawney.

As the popularity around the events at Gobbler’s Knob has continued, the famous Phil has been used in various ways to make everything from social statements to celebrating solidarity during difficult times. Some of the special commemorations that have occurred during the Groundhog Day observance include:

Whether you are hoping an early spring season is on the horizon, or you are a winter fan and want the season to stay its longest, the dueling predictions from today’s groundhog observations let you choose which you prefer to believe.

If you enjoyed this, you may like to read about some common myths about Groundhog Day.